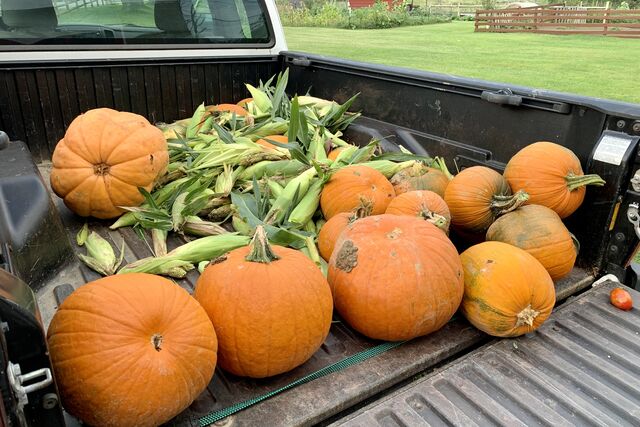 The Bible talks about allowing the the poor to glean the fields, picking up products left by the harvesters. This was once a significant way the poor, often women, willing to put in a little effort could feed themselves. It was a sacred Hebrew law and is central to the story of Ruth and Boaz. People were still significantly utilizing gleaning well into the middle of the 20th century in order to feed themselves.

We don’t hear the term, Glean, much anymore in today’s time of mechanical reapers and cheap, easily accessible food stuffs. Few people want to go out into a farm field or orchard and pick up left behinds. A few organizations partner with larger farmers to glean seconds for food banks, but not many individuals seem to do it any longer tho. Not me! I jump at the chance anytime it is offered. It’s a great way not only to add to the pantry but to feed livestock as well.

Last year it was apples and pumpkins. 11 5-gallon buckets of apples and pears and 3 truck loads of pumpkins to be exact. Not to mention the left over decorative pumpkins co-workers gladly gave me as they cleared them away. It was 2 Christmas trees that the goats eagerly ate, it was hickory and walnuts gathered up here and there. It was potatoes deemed too small to gather. Each bit by themselves perhaps not a lot, but together, a significant amount that fed myself and the critters here.

I’ve found that many small producers once you develop a basic relationship with them are willing to let you glean in their fields. Some don’t because they fear you getting hurt and sued, but once they get to know you a little bit, they loosen up. Most people like to see things be utilized, they don’t want waste and are happy to let you “clean things up.”

So talk to people. Listen to their story, share yours. Offer to help them in their work or take them something you made with their product. Before you know it they are saying, here take this or would you want that?

This year I was offered not only blemished pumpkins and lots of “seconds” tomatoes but an opportunity to come clean out any damaged or blemished ears from a sweet corn field for the animals. After one trip it was, “take what you want to eat for yourself too.” I’ve picked close to 300 ears so far that I have drying and I’ll go again and get more when I can. What have I given back in return? A dozen eggs and a few packages of pork from my pigs.

So glean! You’ll be amazed at the food you can secure.