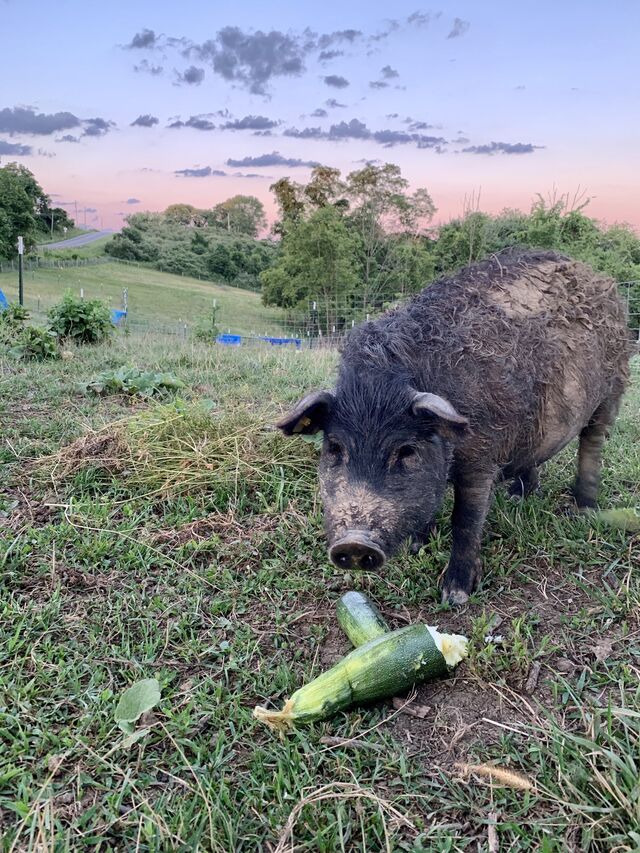 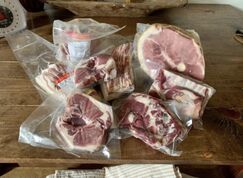 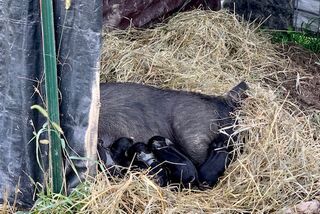 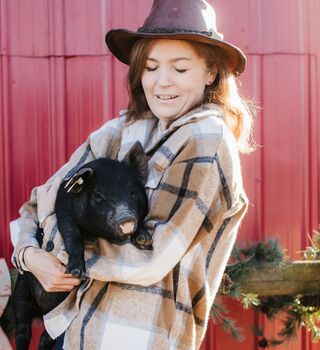 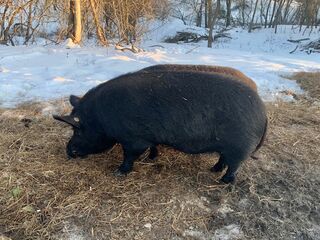 The American Guinea Hog (AGH) can find its roots with some of the earliest settlers in the American South with its origin being possibly 200 years old! This hardy landrace pig was valued for its ability to thrive on pasture and woodland, excellent temperament and of course its lard. As American's turned to the desire for a faster growing pig and they moved away from natural cooking methods, the Guinea Hog found itself out of favor. Its numbers slowly dwindled and if it wasn't for the dedicated effort of a few people, would have gone extinct.

Today the Guinea's numbers are slowly increasing but it is still listed on the Livestock Conservancy's Threatened list.

We chose this breed because we wanted an animal that could be fed from what the farmstead produced, without the need for extensive expensive grain inputs and had a good temperament. I did not want a 600# hog that could badly injure someone. The Guinea Hog has a wonderful calm temperament. We’ve handled piglets hours old with the sow not the least bit concerned. The longer period to market/butcher weight (16-18 months) was of no concern since it could be easily fed on pasture, waste milk and orchard produce, vegetables as well as free grain by-products (spent brewery grains). The flavor of the meat is hard to beat! The lard makes beautiful soap and is a health alternative to processed cooking oils. The pigs bred and raised on the Broken H will typically sport a white leg or socks. They are handled soon after birth and are raised on pasture with their mothers, never knowing close confinement except right before being sold, when they are tagged and prepped for their next journey. The sows, boars and barrows being raised for meat can be handled, petted and worked without concern.

If you are looking for a hog to fit into your homestead, check out the Guinea. In my opinion this pig is almost the perfect Homestead hog.

Learn more about this breed on the AGH website: https://guineahogs.org/guinea-hog-facts